CLICK HERE for for FemDomina site #2
To see this working, head to your live site.
Search
Darkladys_alyssa
Apr 05

'step into my heart, welcome to my world....seek and you will find...I'll be waiting here...with my arms unfurled'.

as to matters of the heart 'Love' is involved....hence the declaration DLC is a 'Loving' Female Authority figure...

miscalculating it so many males think Female domination is only about whips and chains and the like.

while it's true those aspects may be involved....under the guidance of my Mistress alyssa has learned it is sooo much more than that. first off did you notice i no longer use my old name in speaking about myself....instead i am alyssa therefore my feminine name is what i answer to and use.

it is who i am now and the thought of it excites me...

She is leading me to see and feel and experience the light of the feminine within Her gurl. filled with admiration and respect for Mistress Camille it is a loving journey under Her guidance.

today we'll speak on how Mistress lets a Female Led Relationship play out with those males brought into 'Her' world. it involves the process of psychological and physical change. in the beginning it starts with harnessing the male ego utilizing a vow of chastity among other things. shaved smooth hairless one of many initial requirements here is alyssa in 'her' first chastity cage

over time Her gurl alyssa has adopted to being made chaste. i've gotten used to it the same as i have taken to always sitting to urinate. a smooth body, a chastity cage...sitting to pee...all take me out of old behaviors.

put another way the psychological training had begun taking hold.

sexualization of desirable behaviors: a male thinks of maids work as feminine and likely has had fantasies of fucking a girl in a french maids uniform. a skilled Mistress will have Her male candidate wearing the same...it disrupts his conception of what his male ego thinks about himself. subconsciously thinking 'if i am in a maids outfit i must not be a real male'....after no 'real' man would allow himself to look like that as he goes about domestic chores on Her orders...Mistress DLC has some of her gurls in like-minded costumes that further emasculate.

another tactic to break a male ego...spurting out an orgasm Mistress witnesses and sees a male digesting it...DLC has pics of all her gurls doing this.

a real man comes when he wants to...his seed violently erupting is often a demonstration of his alpha-ness.

yet it is a valuable tool in breaking a male ego. 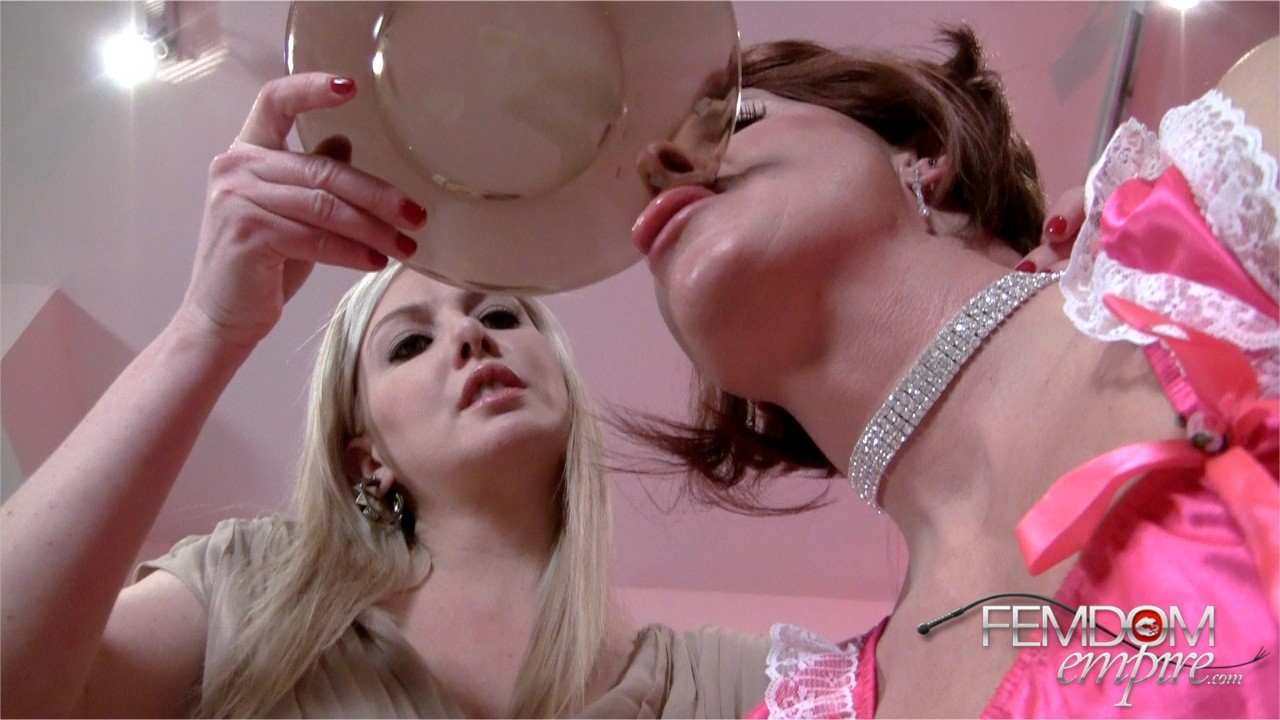 continuing on next comes establishing an authority figure:

operant conditioning and adverse stimuli: desiring complete ownership a Mistress will act on negative behavior with severe punishment being doled out. in my case early on i once spoke out of turn using the wrong responses of 'ok' and 'alright' when being told to do something.

in the session DLC immediately ordered 600 self-spanks be applied.

Mistress will also leverage positive reinforcement. perhaps we could sum it best by saying good gurls get rewarded and bad gurls get punished.

alyssa after a favorable session with Mistress...having done everything the way DLC wanted Mistress told Her alyssa she was allowed to send in pictures of me in some nice outfits. hairstyle given proper attention...in full makeup...femme-hoop earrings in pierced ears... my manicure and pedicure completed at a beauty salon...splaying my nails to show them off...one can see the femininity blossoming...i've grown so used to wearing lingerie 'everyday' it would feel odd not being in intimate wear.

Identity reframing: using both pride and shame as powerful means of behavior control. Mistresses have long known of the benefits of using exercises in reinforcing the alteration of an identity into that of a t-gurl. the more emasculating behavior a male candidate participates in the stronger their feminine side develops...until it feels natural acting the way a submissive woman does.

here is an example...the former male has gone full post-op...his mind and body reframed into that of a woman's...with a lovely pussy and beautiful breasts 'she' is quite comfortable being put on display.

no longer physically threatening as a man the former male now has the desire to appeal as a feminine delight....instead of building up brute strength through weightlifting the t-gurls focus is on enhancing her feminine qualities...

irregardless of how tall or beefy a man is when the process starts out...

a feminine flower of a t-gurl will emerge...there is no hiding d-cups by the way..

being dressed up with no where to go may feel nice.....yet..

it's getting a budding gurl out and about awash into his transformation that helps reinforce the changes that have occurred in the past with much more of them lying ahead in the coming months. in mixed company the gurl turned maid is being of service. it's important that a male to feel a loss of agency....that he is not part of the conversation instead seen more as an object...in this case viewed as a secondary emasculated being better seen and not heard.... short-skirted fully made up is he seen as a man?...I think not

weak as a kitten...thinned out near t-gurl perfection...the days of acting like a loud boisterous man behind him...a more docile nature emerging his focus is now on feminine interests and vanity concerns....and perhaps what boutique is having a sale on high heels...

moving past the point no return when a former male has his top lifted to show off his breasts he'll move into that space where he is now an objectified feminine being...

it's been a focus of mine lately...i'll admit part of me is a little scared...that male part that is vanishing the longer i am a DLC gurl......Dominatrix Camille put alyssa on femme-herbals 14 months ago...during that time my breasts have continued to develop...more and more i realize the time will come when i 'need' to wear a bra out of necessity.

i've thought about what being put on estrogen will do...they're going to get larger and fill out with a milky fluid all women have. it is part of what i was just writing about...people will see what i look like with breasts...the idea of it both thrills and frightens me.

for 3 years now i have learned to express my feelings and fears to my Mistress...Dominatrix Camille knows more about Her alyssa than anyone on earth. She has witnessed the change that has occurred and most often recognizes it before i do.

DLC was just as soon see me as cute plaything of a t-girl caught up in her gurls world...

with an element of care in Her loving way Mistress DLC guiding me ever closer to fulfilling the mission of turning 'Her' gurl full-time pretty-trans. She'll want me showing off my assets while expressing my gentle feminine nature that has been cultivated and nurtured over the length of 'our' journey to the Lady pond....